4 NATIONS PARA-BADMINTON CHAMPIONSHIPS – ENGLISH LEG, SHEFFIELD, JUNE 13TH – JUNE 14TH A quick update on how I got on over the weekend at the Welsh leg of the 4 Nations. I finished 3rd in the WH1 singles and runner-up in the wheelchair mens doubles losing 19-21 -16-21. Unfortunately didn't get to contest the wheelchair mixed doubles as my partner had to withdraw due to injury and wasn't worth risking further damage with the World Championships just 2 weeks away. On the weekend of June 13th – 14th Owen competed in the English leg of the 4 Nations Para-Badminton series. Owen reached the semi-finals of the Wheelchair 1 mens singles losing out to top seed and world number 5 Connor Dua-Harper (Devon) 21-9 21-12. Playing with Denny Vettom (Aylesbury) in the mens doubles, Owen reached the final. Struggling to find any form or rhythm in the match, Owen again lost out to Dua-Harper and his Devon Racqueteers team mate David Follett 21 – 9 21 – 10. In the mixed doubles Owen paired up with Scotlands Fiona Christie. After being in top form In the group stage, defeating Dua-Harper and his partner Sharon Jones-Barnes in the group stage 21 – 15 21 – 12, the two pairs met again the final. The final was a much closer affair with the victors this time being Dua-Harper and Jones-Barnes with a 24-22 21-18 scoreline. Next up for Owen is the Irish Para-Badminton International Open in Dublin from June 24th -28th where he will try to gain as much world ranking points as possible to get a good ranking for the World Championships later on in the year to be hosted by Badminton England at Stoke Mandeville stadium. CARLTON IRISH PARA-BADMINTON OPEN On the 26th – 28th June Badminton Ireland hosted the first Carlton Irish Para-Badminton Open and the competition attracted many of the world’s leading Para-Badminton players. Nottinghamshires Team England Para-Badminton player Owen Kilburn came away from the championships with a Bronze medal in the wheelchair mens doubles pairing up with Jordy Brouwer Von Gonzonbach from the Netherlands losing out to the eventual winners and top seeds Ho Yuen Chan (Hong Kong) / David Toupe (France) in the semi final. In the wheelchair mixed doubles Owen and his partner Fiona Christie of Scotland reached the quarter finals and were beaten by the first seeded pairing of Ho Yuen Chan / Karin Suter (Switzerland). In the wheelchair class 1 mens singles Owen put in his best singles performances in International competition so far by reaching the quarter finals and just losing out to 3rd seed Avni Kertmen from Turkey in a very close 55 minute match with the scores of 25-23 22-24 19-21. Full results can be found here as well as videos from the championships here. Team England came away with a total of 10 medals and the championships were great preparation for the upcoming Para-Badminton world championships to be hosted by Badminton England in September at Stoke Mandeville Stadium, the home and birthplace of the Paralympics. Click for more details of the upcoming Para-Badminton World Championships. 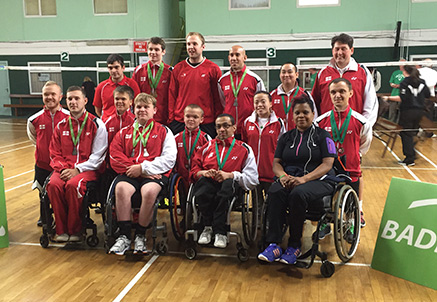