22 JUNE 2016 AT WIMBLEDON R&FC SPONSORED BY THE ANDERS FOUNDATION Pupils from Blanche Nevile School, North London and Oak Lodge School for the Deaf, Balham, this week, took part in the above event. It was aimed at youngsters with a hearing impairment and/or with learning difficulties who had not represented their school before in badminton. The morning started with a fun warm up game. Fundamental skill stations were then set up for the pupils to move round in groups. This was followed by a fun game led by coaches Lorraine Brydie, Carol Bilton and Gary Sexton to finish off the mornings activities. After lunch the youngsters took part in a fun tournament which culminated in two finals. The A Singles final was particularly close where the players were given lots of positive encouragement from the side-lines. Trophies donated by Keith Henderson were awarded to: A Singles Winner – Brady Landu (Blanche Nevile) who beat Carolina Neves-Pinto (Blanche Nevile) 15-10. This was played on a full court. B Singles Winner – Isabella Ealey Newman (Oak Lodge) who beat Hamid Baig (Oak Lodge) 11-4. This was played on a ½ court. A trophy was also awarded for the “Most Improved Player” of the day. The coaches decided that Jessia McDonagh of Blanche Nevile was the worthy winner of this. All winners received a gold medal and racquet donated by Peter Smith Of HL Badminton Ltd. The runners up received a Silver medal together with an Anders Foundation T shirt. Jessia received a t shirt also. All participants received a medal for taking part. The trophies shall be engraved and kept at the Club for safe-keeping. A special thanks must go to The Anders Foundation Charitable Trust who generously sponsored the event together with Peter Smith of HL Badminton who donated two racquets and covers for the winners. 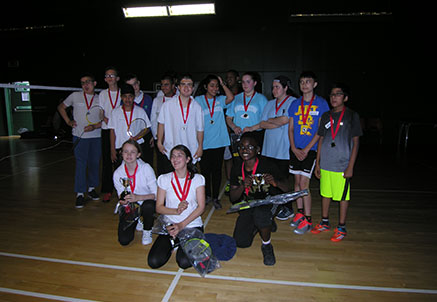