Emma Stoner 12 years SL3 Player selected for Surrey U14 First Team Report by Lorraine Brydie Disability - Badminton coach at Wimbledon Racquets & Fitness Club Emma joined our weekly disability badminton sessions, at the club, when she was just 8 yrs old. At that time she was a reluctant participant, but, with a little persuasion we soon turned this around and she has made great strides since! When Emma was just 10 yrs she competed in Surrey’s first senior Para-badminton tournament. Emma, at the time, knew that it was unlikely that she would win any games, but, this did not phase her in any way. I was so impressed by her attitude and the way she was able to focus and try to win every point she could. Last year she was runner up in the ladies doubles event! In the last 3 years Emma has been attending the monthly Talent Spotting disability badminton Sessions at the club. These are sponsored by The Anders Foundation and were set up to aid promising youngsters, aged 8 – 18 years, gain access to more intense coaching which would eventually steer them along the performance pathway. These sessions were set up to talent spot youngsters who have good hand-eye co-ordination but have a disability, physical or learning. In addition to these sessions, Emma joined the Raw Performance weekly junior sessions at the club. Playing alongside talented able-bodied players has been key to her most recent success. In the last year Emma has entered local Surrey junior events and has come runner up twice in the u14 girl’s singles tournament. Emma’s disability only requires her to play on a half court but she is competing and winning, against able-bodied players on a full court. This will stand her in good stead though as her classification may change. She is also playing doubles in these events which will give her invaluable experience in the future and will enhance her progress as an all-round event player. As a result of her success in Surrey, just recently she was invited to join the u14 squad for weekly training, and, soon after, was quickly selected to play for their second team. Her match results have been so astounding that she has now been selected for the first team! We are all very proud of Emma’s work ethic and sheer determination to give her very best each time she steps on the court. Her disability has never held her back. There is no doubt in my mind that she has all the vital components of a true champion and is part of the new wave of players coming through, who will go on to represent England in para badminton!! 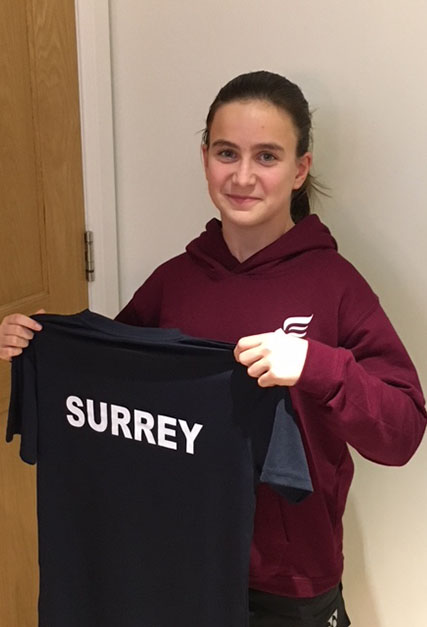