Our congratulations to Alex Lane on a great season reaching his first National Mens’ singles final and being selected to represent England in the Thomas Cup in China. The Anders Foundation has supported Alex Lane for two tournaments in 2016 and will continue supporting him during the 2016-2017 season. MY BADMINTON YEAR 2016 WITH THE SUPPORT OF THE ANDERS FOUNDATION At the start of this Badminton year I decided to leave full time training at the National Badminton centre in Milton Keynes, after training for 2 years, and attend Bath University. As a junior I won the European under 17 Singles Gold medal and our National Under 11, 13, 15, and17 titles. I competed for England at the Youth Olympic Games in Australia and the World Junior Championships in Japan. When I left the National Badminton Centre all my funding was cut as I was no longer playing full time; however I still wanted to compete and train full time while studying for my degree with the plan of returning to full time play after university. The Anders Foundation has supported me this year and without their help I wouldn’t have been able to carry on playing the European circuit. This year has been my best year since leaving the junior circuit. At the start of the year I won my first senior International winning the Mens’ singles title at the Slovak Open. I then competed in the Welsh and Dutch Opens where I reached the quarter finals. I also played in the Scottish, Orleans, Polish and Hungary Internationals. At the English National Championships this year I reached my first singles final beating Toby Penty, ranked No. 2 in England and 103 in the world, in the semi-finals. I was then picked to represent England at the World Team Championships, the Thomas Cup, in China in May. Here I was awarded my first Senior Cap and only lost in three close sets to Soon Huat Goh from Malaysia who is ranked number 53 in the world. In my second match I beat David Peng of Germany. I have now finished my first year at university so will be training back at the National Badminton Centre throughout the summer with my next tournament in August. 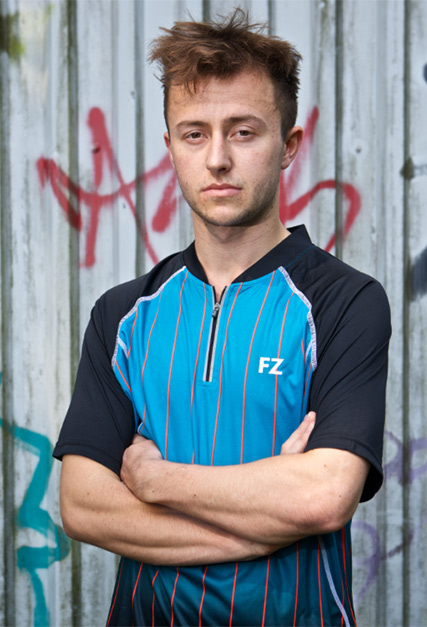