Clive Noel, a close friend of Anders, has entered the revered 'Tour du Mont Blanc'." Clive says "This is a brutal Alpine cycling race covering 330 km and 8000 metres of climb....in one day, yes, one day! Most riders don't finish....I'll do my best not to be one of them." http://uk.virginmoneygiving.com/fundraiser-web/fundraiser/showFundraiserProfilePage.action?userUrl=CliveNoel News after the event from Clive: Well, as some of you know, I had to withdraw from the Tour du Mont Blanc with mechanical failure, namely a snapped chain at the top of the Col du St Bernard, just over a 100 miles in. A big disappointment as I was making very good time and feeling good. I had a support driver (thankfully !) and by his reckoning I was in the top 30 at that point. There was unfortunately no mechanical support for this race because of the sheer distance involved, and in the event of a snapped chain, it's game over. There's no guarantee I would have finished anyway, as later in the day, there were quite horrendous storms, driving rain, wind and a significant drop in temperature, as happens at altitude, hence many riders were told to abandon by race marshals, as conditions were too dangerous to continue. As we started in the dark at 5am, not great opportunity for photos unfortunately, but here are a couple... From all the Trustees of the Anders Foundation, our thanks go to Clive and for his great fund-raising effort and safe return. 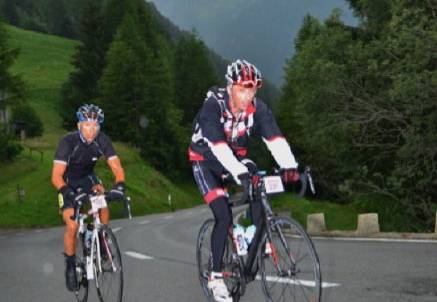