The English Para-Badminton Team was at Hatfield Sports Village at the weekend for a training camp with a little bit of a twist. Fourteen of the England team travelled to attend the preparation camp before the first English International Open at Loughborough University next week. Nearly 100 players will be competing in an event featuring 23 classifications. The England stars are preparing to take on some of the best players in the world and the tournament starts with classification on Monday and runs until Sunday, 28 June. Last Saturday morning’s session was “a brilliant standard,” said coach Tom Mills – and there was a special surprise for the players in the afternoon. The Anders Foundation is a charity that supports Para-Badminton in any way that they can and they sponsored the team to help organise some extra sparring players for match practice session in the afternoon. Former world champions and Olympic silver medallists Nathan Robertson and Gail Emms, double Commonwealth gold medallist Jo Goode and All England champion and Commonwealth bronze medallist Nick Pointing all attended the training camp to give England’s para players a well-deserved reward. Head coach Richard Morris said: “It was one of the best sessions I have ever seen. The two hours of constant matches created some amazing rallies and some very tight games.” The players will travel to Loughborough to take on the best in the world with some great advice and matches from the weekend’s training. This will hopefully result in the squad accumulating a group of medals in all categories so good luck to all the players. Come on England! The photos include Gail Emms and Nathan Robertson with Daniel Lee from Ebad and the group shot showing all the players. 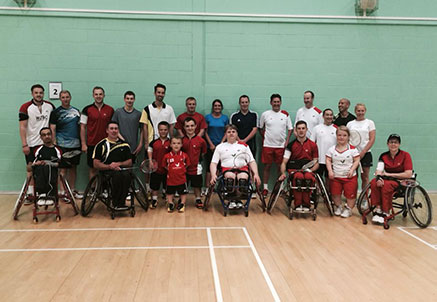