The Anders Nielsen Golf Day held at the RAC Club Woodcote Park Epsom on June 16th 2014 was again a huge success with the weather again be very kind. The course was in great shape, as usual, and the catering was again superb. Sam Gale and David Barker from Sparks were responsible for running the event in their normal extremely efficient manner and we are proud to share the spoils between The Anders Foundation and Sparks - two very deserving charities. It is perhaps quite fitting that the overall team prize was won by the ‘Litebulb Meld’ team of badminton players including Nick Ponting, Dave Wright, Nathan Robertson and Rob Nock whilst Dave also won the individual prize for best stableford score of 43 points which has earned him a free trip to Mexico! Nick and Dave were best friends of Anders and there by his side through thick and thin as he struggled with his cancer whilst Nick is also a trustee of The Anders Foundation. Anders’ mother Heather Nielsen was also on hand to present the prizes and star in the photographs! Thanks to all who played, sponsored and contributed to a great day and see you all again next year! 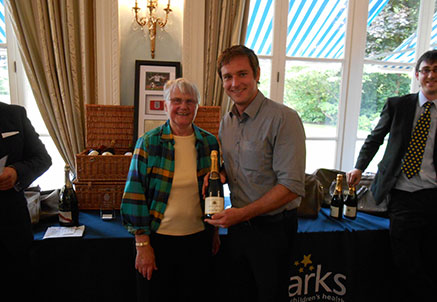