Many many thanks from the Anders Foundation to Lucy Cowen for her great effort! From Lucy Cowen, uk.virginmoneygiving.com/LucyCowen On Wednesday 4th June 2014 I really did test my nerves to the limit while abseiling down the iconic Spinnaker Tower in Portsmouth! It wasn’t until I was driving down the A34 on my way to Portsmouth that I really gave what I was doing much thought. As I drove through torrential rain showers I was beginning to get slightly hopeful that I might be let off the hook. After being strapped into our harnesses, topped off by a hard hat and leather gloves, we were given step by step instructions and safety information. The guys from ‘Appetite For Adventure’ made it all sound so easy. Then it was time to be clipped on and stepping very gingerly over the edge. The hardest part for me was actually making the final commitment by taking my left leg off the ledge, it is hard to believe that the ropes and harness will hold you. I can’t say my descent was particularly spectacular, more an ungainly dangle down the very smooth painted wall! Of course I did all this to raise money for The Anders Foundation which was formed as a legacy to Anders Nielsen who sadly lost his life in 2010 after a year-long fight with Cancer. 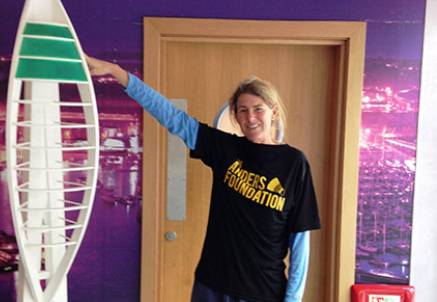